Once you've entered your credentials in the authentication, they are stored on FactBranch's servers, encrypted-at-rest and the password will never be shown again anywhere in your FactBranch account.

In this article you'll learn:

Creating a read-only role in Snowflake

We recommend to create a role and a user for FactBranch only and only grant the role rights it needs to run your query. Typically this means giving read-only access on the tables you will query.

This is a basic example of how to create an appropriate user and role in your Snowflake instance. Use this as a starting point depending on your own requirements.

First, create a role for FactBranch:

Creating a user in Snowflake

Create a database user for FactBranch. Replace all values surrounded by <...> with your own values.

Granting read-access to the role

Grant the role we've created above to the user, allow the role to use your warehouse and grant read-access to the role for the database, schema, tables and views. Again, replace all values surrounded by <...> with your own values.

Connecting FactBranch to your Snowflake instance 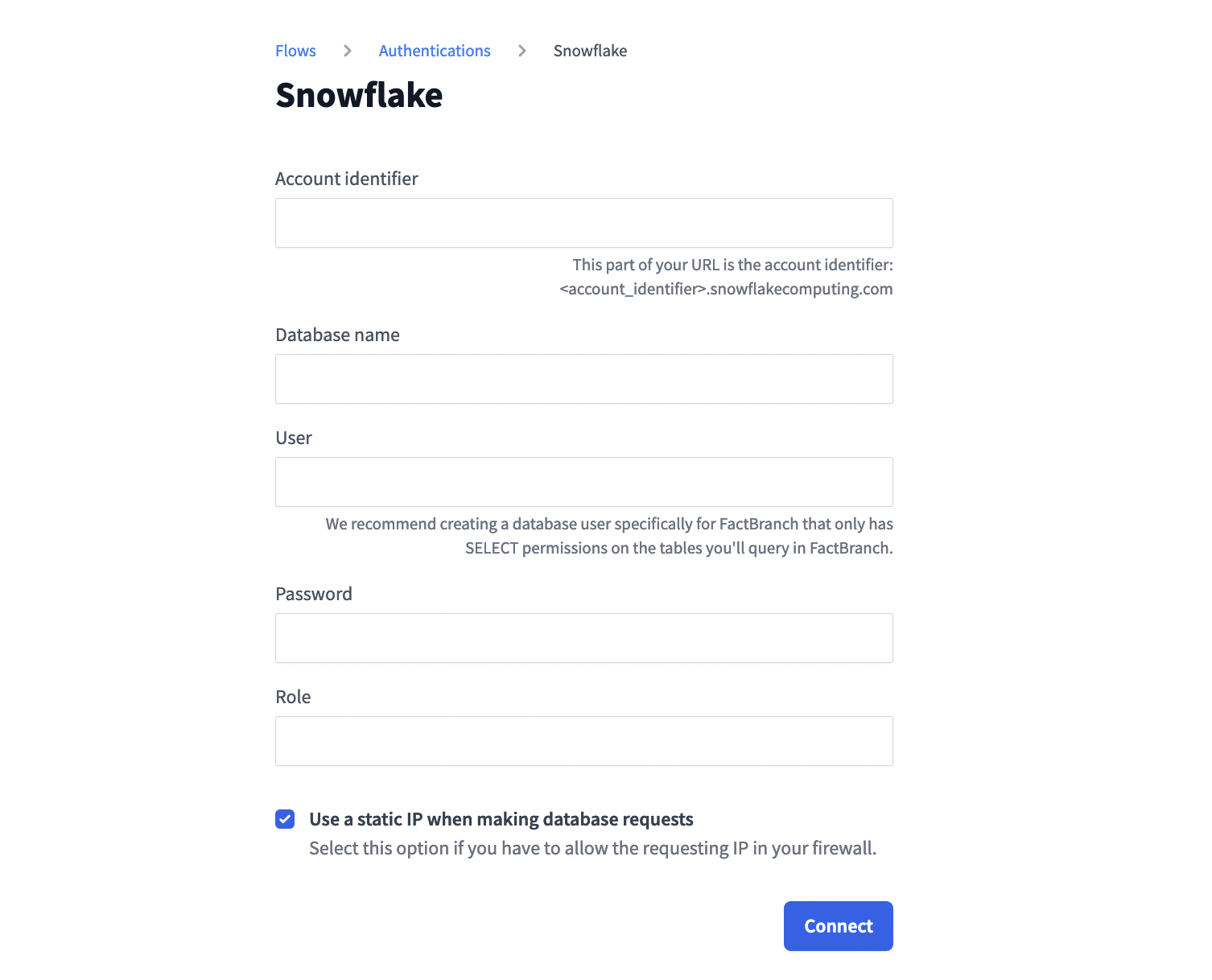 Account identifier
The URL for your Snowflake instance looks something like this: https://<account_locator>.<region>.<cloud>.snowflakecomputing.com - the account identifier is the part between https:// and .snowflakecomputing.com and in this example would be <account_locator>.<region>.<cloud>
Database name
The database you want to query and also where you've created the user and role above.
User, password, role
You've created user and role in the previous steps. If you are following this tutorial, it will be fb_user and fb_readonly_role
Use a static IP when making database requests
Keep this checkbox checked. FactBranch will use a single IP to query your Snowflake data warehouse and in the yellow box below the checkbox you'll see the IP address. In your Snowflake firewall allow access from this IP address.

Once you've filled out everything, click Connect. FactBranch will test the credentials you've entered. If it was successful, you'll be forwarded to the list of authentications.

You can now use this authentication in a Snowflake node to run an SQL query in your Snowflake data warehouse.

To rename the authentication, either click on Rename next to the title, or double-click on the title itself. Then enter the new name and click on Save or hit Enter on your keyboard. To revert to the old name, hit the Escape key.

Using the authentication in a Snowflake node